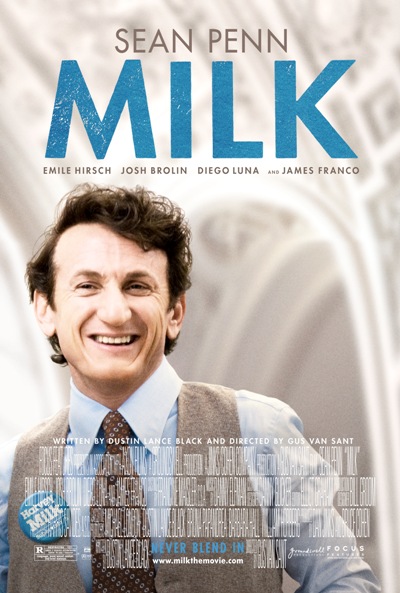 Occasionally a trickle of gay films makes it through the censors and the distribution channels. We had the love stories. Brokeback Mountain. Imagine Me and You. Then there were the shows that featured famous people, among them last year’s Indignation fundraiser, Wilde. Now there is Milk, a intelligent biopic that is deeply entwined with the gay movement.

To put the premise in a nutshell, Milk is the real-life story of the first openly gay man who took political office in the US, Harvey Milk. He ran for office three times, was finally voted city supervisor on his fourth try, and only a year later, had an untimely death at the hands of another supervisor. Gus Van Sant tells the story of this man in personal and political terms, tracking his career and recreating his love life, taking some dramatic liberties with the latter while remaining outwardly faithful to the former.

So that I can get this out of the way first — I think Milk succeeds through its sincerity, its contemporaneity, the political relevance of a buoyant civil rights movement, brilliant acting from Sean Penn and the supporting cast, and a lot of effort and talent put into the production otherwise.

A lot of this is about having the right movie at the right time. In these heavy-hearted times, we need hope more than ever, we need to believe in the power of the average person to bring about change, and we want to believe in the power of rhetoric. I’m thinking of the number of heads that turned when Obama’s inauguration was being played on TVMobile today. Milk is as relevant to us today as to the people then, and doubly so to the gay population.

I went into the film expecting strife and a struggle towards progress. Not only did I see hope, there was darkness too, enough to give it the sharp, bitter edge of idealist politics in the real world. So many times, I disagreed with the Milk lobby’s methods and was shocked at the amount of verbal violence they threw out for the cause, cruel attacks from the opponents notwithstanding. I suppose it is frightening for me when two fronts clash in a war. Even the uneasy divide between the queer men and women were shown when Anne Kronenberg (Alison Pill) comes up against a roomful of skeptical gay men.

And the wonderful thing is, these thoughts were so much more interesting and grittier than the lesbian drama and teary coming out sequences that sometimes is all there is in the queer movie diet. Sometimes I just want a mature tale of a person who is gay, period, and to see a narrative about a part of his life. Milk is that in spades and also is a banner-waving tale of the slow but sure victories of the GLBTQ cause.

One of my favourite things about Milk is the way it humanises. It makes politics real. It shows the sweep of change across the US and the world. Glacial change can be seen in an instant. History moves within the movie. Take the leap to our time, and further parallels can be made. The battle over Proposition 6 instantly calls up the spectre of Proposition 8 in the American landscape. Even on these shores, we dream of gay marches, real pride parades that are nearer reality than ever before. Milk gratifies. It claps forebears on the back without being overly cloying. It tells us that activism can change the world. It tells us that an ordinary man, not too young, can stand up and make a difference, and that we, by extension, can too.

And if that isn’t a clear-cut salute to the power of democracy and civil rights, I don’t know what is.

So even if our marches may not be as passionate or violent, we can live honestly and fight truthfully, each in our own way. Almost, I can turn my back on the fact that it might not appeal to outsiders to the gay cause, to nagging thoughts that no one besides us really cares about this slice of history. But it’s about taking the dark with the light, isn’t it, and living in this imperfect world of our very own the best we can, and I’m glad this movie was made.

(Now we should all go and watch Rob Epstein’s The Times of Harvey Milk, a documentary based on Randy Shilt’s biography.)

Editor’s Note: Milk is currently playing in Singapore theatres. We thank Fridae for complimentary tickets to the local fund-raising premiere of Milk.