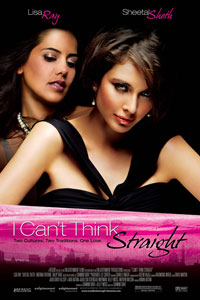 I watched I Can’t Think Straight with high hopes and anticipation. The trailer was certainly enticing, and so was the possibility of watching Lisa Ray (whom I was drooling over, since her role in Water) in some girl-on-girl action.

I have to say, I wasn’t too disappointed. I Can’t Think Straight is precisely the kind of movie we need more – the ones that involve non-white people and happy endings, the lead characters being an Arab Christian (*gasp*, yes they exist) and a Muslim Indian (born and bred in Britain). It can quite easily be called a cross between Imagine Me and You, and Runaway Bride, with a Bend it Like Beckham-ish flavour. The plot is entirely predictable to a fault, and nothing really surprises the average viewer. But I am not complaining, because for years, I’ve been complaining that we do not have enough happy ending gay movies.

Lisa Ray and Sheetal Sheth are reasonably good actresses – though there are no Oscar-worthy moments, they are entirely believable in the chemistry between them. After all, one look from Lisa Ray’s smouldering green eyes could turn the straightest girl gay. The sex scenes between them are definitely hot – and as a plus, we get two of them!

The writing is average, and laugh-at-loud funny at many points – however, I am not sure whether it is due to the writing or direction, but at some times, the movie is just simply clunky. It might have something to do with the fact that this was a print-to-screen transference, where the fluidity of the script was lost on the cutting room floor.

Overall, the movie sends a very positive message. A friend of mine, while watching it, complained that there wasn’t enough character-development and building up of the chemistry, but I disagree. After all, it is TV. Harry and Sally didn’t spend months dating and talking before they got together (that we saw on TV), and neither did Ian and Maggie (they decided to get married after their first kiss, for god’s sake). The film does not win points for realism. In real life, the coming out to a Indian Muslim family, or an Arab Christian family for that matter, would be met by a hell of a lot more problems and backlash. But this is entirely fine in my opinion, because I am sure Harry and Sally did not live happily ever together anyway.

It is most definitely worth watching if you can get your hands on it.

We thank Regent Releasing for allowing us access to a screener of the movie for review purposes.

Was just wondering, anyone has any idea if this movie would be shown here in Singapore? I would really love to watch this movie. From what I’ve read, this was the first ever movie for the first time director and her second movie ‘the World Unseen’ greatly shows her improvement.
Reply
# uma 2010-02-02 00:31
#

pleine chan, where did you watch it?
Reply
# soupbuns 2010-11-03 13:27
It was a terrible movie. 'Nuff said, disagree with me if you will. Bad quality, overpriced, bad forced dialogue, bad forced in lesbian references, bad pacing, unresolved plot lines, lack of character building, sudden scene cuts that only further confuse the timing of the movie, bad job at Grand GV where the DVD Root Menu appears at the end of the credits, bad subtitle bugs at the bottom of the screen, and I can go on.
Reply
Refresh comments list
RSS feed for comments to this post