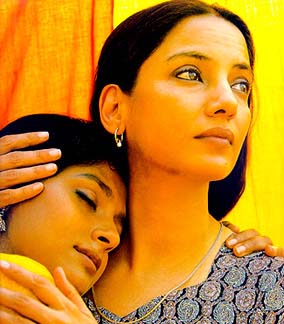 Last night, I went to watch Water1 with my family. Water, for those who do not know it, is the latest edition of Deepa Mehta’s elemental trilogy, which opened with a bang 9-10 years ago, in the form of the explosive film known as Fire.

Ah yes, Fire. Rings a bell, does it not? The controversial lesbian film which caused a fair bit of damage to theatres in India when it first opened. The story is about two sisters-in-law in a typical Indian household who fall in love, and the consequent problems. It was consequently banned in India [and might I add, Singapore too], while it went on to garner awards in international film festivals.

After Fire made its own, pardon the pun, firestorm in India, it was 9 years before someone broached the topic again, the hideous creation known as Girlfriend not withstanding. This time, it touched me a lot closer to the heart: a wonderful woman known as Ligi Pulapally made a lesbian film in my language[Malayalam]: The Journey, or Sancharam, released in 2005. The story is about two rural girls who grow up together as best friends, and wouldn’t you know it, fall in love.

So why in the world am I talking about these two films most of you probably have not watched?

The same reason everyone talked about Brokeback Mountain: it touched them. One of the reasons Brokeback made such an impact on the [American] public is this: it took the ultimate cultural bastion of America, cowboys, and made them gay. The machismo of John Wayne is legendary, the romanticism of the Wild Wild West imprinted into the consciousness of the average citizen. Is it any wonder so many uptight conservatives protested not the gay content per se, but the fact that it seemed to emasculate cowboys?

The reason Fire touched me is simple: its heart was in the story I grew up listening to, the Ramayana. Repeated references are made in the film to this epic, at the end of which, the pure, chaste wife of Rama, Seetha, agrees to undergo the test of fire to prove her fidelity to her husband. This epic is so ingrained into the Indian psyche, the values of chastity and purity are very tightly associated with the image of Seetha emerging from the fire unscathed. At the end of the film, one of the protagonists, Radha, is caught in a fire, partly started by her husband. She emerges alive, thus proving, allegorically, that her love for another woman is pure, and she is as pure as Seetha, the symbol of feminine purity.

You can imagine the impact this made on the people who watched it, assuming they were not frothing at the mouth at having their religion ‘distorted’ in such a way as to support a ‘lifestyle’ they do not approve of. [Presumably, the said frothing individuals were the ones who smashed theatres up] I know it had an impact on me, because I cried. I was so bowled over by the perfect symbolism and significance that I could not speak for some time, sitting there with goosebumps on my arms.2

The Journey did not have such allegories or impactful endings, but it made me cry all the same, way before the movie started. Tears of joy, however. Why? At the menu screen, it showed small clip of the characters engaging in a dance of ‘Kaithattikali’, a cultural staple where I come up. While this is not significantly queer, it made an impact on me because of what it represented: the normalisation, and the cultural contextualisation of queer Malayalis. It was affirmation, and not in a western context and message. With that one scene, I already felt I belonged back in the culture that rejects me. The rest of the movie was similarly culture-rich. I loved Fire because of the same reason - it put all of us outcast queer Indians firmly back into the culture that rejects us.

After I had wiped away my tears of joy, it got me to thinking about other cultures have in terms of culturally apropos queer films. For the Chinese: Red Doors and Saving Face are both Asian American films, hence slightly disconnected. Though, in Saving Face’s merit, it did handle the whole immigrants-with-queer-children issue fairly well. I have not watched Butterfly and Les Filles Du Botaniste, both set in China. From what I can tell from synopses and reviews, they are still lacking in that strong cultural connection, unfortunately. To date, I have not even heard of any Malay, Indonesian, Vietnamese or Thai queer films, unless I’ve totally missed them out.

Why does it matter so much? It is not so that I can use up another box of tissue. It is not so that I can watch lesbian sex scenes [which seems to be the main reason many queer people watch queer films]. I could not care less about sex scenes - what matters to me is quality, and the impact it will have on straight people who watch it. The impact of mass media is all too strong. But this impact can be lost through a culture lens, if all we see is representation of non-Asian queer characters. What we need is more Asian queer representation. This is something that has been said for years. But very importantly, we need Asian queer representation in locally produced content, with the proper cultural contextualisation so as to make the most impact. Maybe what we need is a Huang He River.

1. No, Water does not have any lesbian content, for those who are clicking on the Golden Village website to book tickets. But on a non-queer sidenote, I’d recommend it all the same. It is about widows in India, forced to live out an ascetic lifestyle by creed and self-serving ‘religion’. It is not as impactful as Fire, but pretty good all the same.

2. A slight sidepoint which might serve to make my case is that when AfterEllen.com, an US-based lesbian/bisexual entertainment guide reviewed Fire, they did not quite understand or appreciate the cultural significance in the films. They called the metaphors in Fire “heavy-handed”, clearly demonstrating their lack of understanding how deeply this epic is entrenched in Indian psyche, and how it contributed to its breath-taking ending. Even many of you, I am sure, cannot grasp the extent of its significance, not that it is your fault. Culture matters. The same happened for Saving Face, as most western reviewers dismissed it, while the Asians loved it.

Well, there’s Ariste (not sure about exact spelling). It’s Indonesian and about two gay men. I haven’t seen it but Z’s family loves it.. don’t think it’s queer per se, but the fact that the topic was approached and handled without negative light was probably more than we could’ve expected.

Errr the title is ‘Arisan’… it is a common term in Indonesia for gathering, catching up and money-drawing lot.
Reply
Refresh comments list
RSS feed for comments to this post