This commentary contains the personal views of the writer. 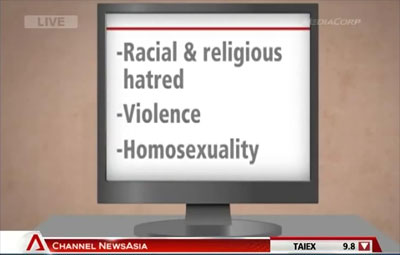 Channel NewsAsia helpfully noted on Talking Point that once licensed under the changed MDA regulations, websites “have to follow certain guidelines on content, for example, nothing that incites racial or religious hatred, promotes violence or advocates homosexuality” and take down offending content within 24 hours. Before 1st June, these websites were under the automatic class licence under the Broadcasting Act, but they now have to apply for an individual licence and put up a $50,000 performance bond.

So what’s new, really? Some commentators have opined that nothing will change. After all, it has been said that individual blogs will not be affected. Organisers could also shift their bases to social media channels like Facebook and Twitter. Others point out that websites have already been removing offensive content under existing laws, and bloggers have in fact been sued for defamation over sensitive posts. Gay Star News has provided gay and lesbian perspectives saying that this change is aimed at political blogs and LGBTQ websites are an area that may still remain fuzzy.

But the real, immediate consequences of this law are only part of the picture. Yes, there are sites that will have to muzzle themselves as a consequence of their individual licence. The news sites of the future may also be deterred by the barriers in place – why aim for a wide readership and commercial success when they bring added controls?

There are other implications, perhaps more ideological ones, which concern me as a queer person.

Before this, websites concerned with LGBTQ issues operated in a grey area: Content which “advocates homosexuality or lesbianism, or depicts or promotes incest, paedophilia, bestiality and necrophilia” is prohibited under the Internet Code of Practice, which affects internet content providers and broadcasters. It should go without saying how ludicrous this policy is, with its premise that people can become gay or transgender through external influences. Now, instead of sensibly revising the law, it has been further embedded in the system as another level of bureaucracy we have to leap.

And then there’s the context this change was introduced in.

The LGBTQ community has coped with our lack of representation in mainstream media by expressing ourselves online. We have formed entire communities on the internet; we were using online dating before it caught on among the straight folk. Virtual communities and online media often are the first places a young lesbian, gay, bisexual or transgender person in Singapore recognises themselves, because we’re invisible on official tv channels.

Sayoni’s 2010 CEDAW shadow report, submitted to the United Nations review committee, cited three instances where tv content providers were fined for simply showing lesbian relationships in a positive light. The CEDAW committee subsequently took up these points in their questions to the state delegation, asking whether the government was considering revising these media codes and policies.

The committee’s concluding observations recognised the presence of negative discrimination towards women, including LBT women, and took the state to task. “The Committee further notes that despite the fact that the State party recognizes the principle of equality of all persons before the law, as enshrined in the Constitution, regardless of gender, sexual orientation and gender identity [...] there is still negative stereotyping of women belonging to this group.”

Indeed, in this environment where pockets of representation are few and between, we have turned to the safety of virtual spaces and online media. (How else would we learn about The L Word?) We've gotten used to relative freedom in the past few years. Little wonder, then, that the news of further regulation came as a slap in the face. How could it not look like a clear step backwards?

Although the government has assured us that the "light touch" regime will remain and that the change will not affect most websites, I was reminded of the rhetoric around Section 377A of the Penal Code, which criminalises gay sex. During the 2007 parliamentary debates, Prime Minister Lee Hsien Loong said it would not be “proactively enforced”. But the section came up again in 2010 in the Tan Eng Hong case, before the charge was amended. The parallels are self-evident.

LGBTQ websites, too, exist in a precarious alternative space. They are allowed to exist, tolerated, but not really acknowledged, somewhat like the queer community here – and lives are constructed in those gaps.

So what happens when you redraw the boundaries between what’s allowed and what’s not? What happens to the grey areas in between?

That said, I acknowledge that the LGBTQ community might not be the main group targeted by the rule change. As a minority that’s already under existing constraints, however, we stand to be disproportionately affected by it, and that's why I hold that we should care about this issue very, very much.