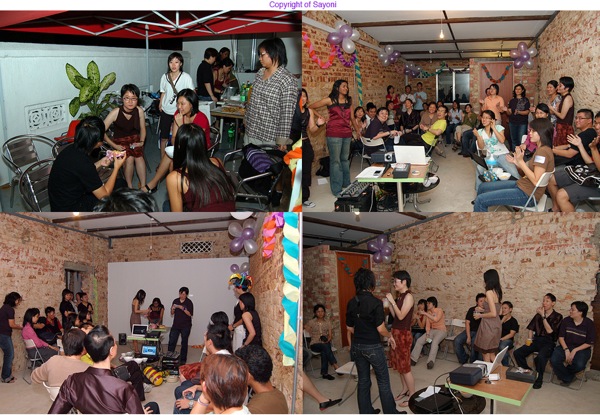 Sayoni commemorated our 2nd Anniversary in style on 12th April, at a rustic world-war-II bunker-like space in Food#03, a rising social entrepreneurship cafe. The party was the culmination of months of planning and preparation, from the drinks to the decorations.

We were hosted by O’Ren Ishii, a new-found MCing talent within Sayoni who entertained the crowd with her wicked sense of humour and presentation.

The highlight of the party was the Sayoni Awards 2008, where a series of fun titles were handed out to our beloved members, such as Drama Queen of the Year, Sticky Rice Couple of the Year etc. 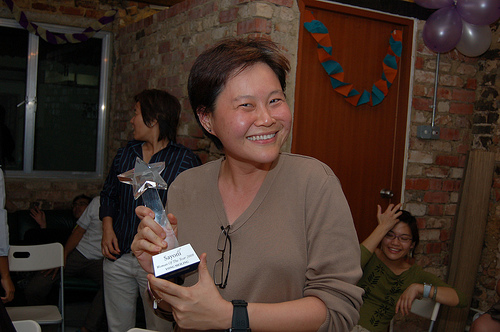 But apart from poking harmless fun at our members, we also know how to honour the outstanding women in our community. Ms Yong Meiling was awarded the prestigious Sayoni Woman of the Year 2008 title, with a beautiful crystal trophy.

This is what Jean had to say when she honoured Ms Yong Meiling with the trophy.

I first got to know Meiling in 2005, hoping to meet the leaders who are in charge of OC Women. We met up, I remember Meiling said she was ‘just helping out’ and nothing more. Over the years, it became, ‘helping out’, to ‘contributing’ to Program Director of OC women. And maybe boss now.

Empathetic, Street smart and certainly no push over, Meiling has shown a remarkable willingness to make a step back for others to lead, change her mind over issues and stand up for those she believes in. We have all seen how OC women’s support group changed people’s lives. Always wanting to ignore our presence, society and gay men alike, it has been the ‘hope in the dark’ when all else is bleak in the society we live in now. Without demanding for hope, we would not have struggled, and without struggle we would not have been here. Virginia Woolf wrote in her journal, “The future is dark, which is on the whole, the best thing the future can be, I think.” Dark, she seems to say, not as in terrible. We often mistake the one for the other. To me, dark as in the familiar female womb where we all come from ready to burst forward to find the light at the end of the tunnel. Today, we honor Yong Meiling, helper to program director of OC Women.

We hope to celebrate many many more anniversaries with you, and continue honouring women in our community.