A Shot At Love With Tila Tequila is a MTV reality dating show, with a twist: the bachelorette is a bisexual woman, and 16 guys and 16 girls will be competing for her heart. Now, normally, I don’t watch reality TV trash. And I watch dating show trash even less, and MTV trash takes the place at the bottom of the ladder. But I was introduced to it by a friend, and in a couple of episodes, I was hooked already. How could I miss a program like this, a pioneer in the visibility of lesbian, and more importantly, bisexual women? 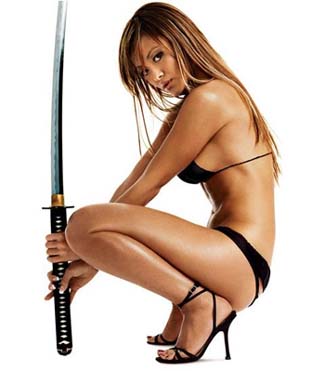 Tila Tequila, the bachelorette of Vietnamese descent, whose real name is Tila Nguyen [now you see why she changed her name to something so much more porny], is an undeniably beautiful, sexy woman. Her beauty can be fully appreciated in all the various outfits she appears in the show, all of which she does justice [except that awful dress made of metal sheets she wore in the first episode]. She is a very picky, often unforgiving person with regards to her suitors, complete with a free-spirited, sometimes child-like personality.

The show itself is as dramatic as you can get. Maybe more dramatic than The L Word. The men push each other into the water, the women try to tear each other’s hair apart, one lesbian tries to use her sex appeal to get rid of the men, people threaten to leave… you name it. More than once, I’ve had to wonder how scripted it is, because it seems so unrealistic, that all the drama that does not happen on camera on straight dating shows happen on this show. Or maybe the producers deliberately threw in some unstable personalities. Or maybe they were “encouraged” to do so. Who knows – what I do know that it makes for a lot of entertainment for me, in front of the computer screen.

One major problem I had with the show is how they chose to approach bisexuality. They pitted girls against guys, and it was fairly obvious from the elimination each week that the producers instructed Tila to keep an equal 1:1 ratio of girls and guys as far as possible. Which really isn’t how it should work… this is a game of love after all, and the girls and guys are equal competitors. Most of the “challenges” in the show, which they had to win in order to win “alone time” with Tila, were organised along girl-guy lines, which did really make me want to hit the stop button.1 Bisexuality isn’t about whether it is a girl or a guy, but whether the person is right for you. Tila herself made a lot of “I like girls for this, but I like guys for that” remarks, which made me roll my very bisexual eyes, and kept saying she had to figure out whether she really liked girls or guys. The suitors made similar remarks too. And the very next moment, she would justify herself saying she was bisexual, and was attracted to both guys and girls, and that no one understood her.

Only in the end, I think, she finally understood it wasn’t about choosing between the sexes. At least one person has gained enlightenment. One down, rest of the world to go.

From this part onwards, I’ll be talking about what actually did happen on the show, including the ending, so if you do not want spoilers, do not read ahead.

In the end, Tila chose Bobby over Dani. Surprise surprise. I actually did see it coming 5 episodes ago, when Tila started being so affectionate of Bobby.

I thought Brandi actually stood a pretty good chance of making it to the final three, but the final three happened to be Amanda, Dani and Bobby. Amanda got eliminated in the second last round, even though “she had really beautiful blonde hair, and it would be just crazy to eliminate [her]” [in Amanda's words]. I don’t even know why Amanda made it that far. Ryan got eliminated before Amanda – I don’t know why he made it that far either. After all, this is A Shot At Love with Tila Tequila, not A Shot at Love with Pleinelune Perry.

The reason Brandi did not make it was entirely her own fault, as she got in a fight with Vanessa the Queen of the Bitches, or rather Vanessa attacked her when Tila did not choose her, and then Brandi freaked out and ran away. She tried to come back, but Tila did not allow her – and you wonder why I say Tila is unforgiving. Vanessa also tried to flirt with Bobby and make him violate the “No hookups” rule, made up lies about Brandi, and pretty much proved she did not deserve to be on the show.

Domenico, everyone’s favourite Italian boy, got eliminated before Ryan. Domenico is, by far, my favorite character, for more reasons than his absolutely endearing Italian accent. He says the best things ever – “Homophobia, it is like when men are afraid of each other! It is like a disease!” and “There is this girl with so much love to give that she chooses to give it to girls and guys”. The contestants actually cried when Domenico left the show, which should tell you something.

The most scandalous things happen on Tila – in the early episodes, after they all moved in together on the same bed, Steven and Rebecca were rumoured to have hooked up under the sheets. But even with the grainy camera footage, no one knows for sure. Rebecca got the boot, Steven didn’t. But he did eventually, much later, for being a typical man, and groping and trying to kiss Tila disrespectfully.

Coming back to the final episode, the moment when Tila chose Bobby, I felt really sad for poor Dani, the sweetest and cutest person in the world. It was actually very surprising that Dani made it to the final two, because Tila typically dates lipstick lesbians, and in the beginning, it just didn’t seem like Dani had much quality time with Tila. But once she started stepping up her game, it was clear what a sweetie she was, and Tila did really like her. Dani shouldn’t worry though, because now that she is famous, girls are lining up outside the door for her.

As for Bobby, he is really cute, and I can see why Tila finds his rural youthful innocence, and his occasional clumsiness endearing. And I guess it does help he got into accidents more than once, and was beaten up by Ashley. So, note to all the boys out there (I doubt any are reading this blog): you want to win a girl’s heart, make sure you are cute, and get into accidents. Nothing too major though, and make sure you don’t injure any vital organs you are going to need, when you do win her heart.

Good luck to Tila and Bobby. Something tells me they are going to need it.

Review: A Shot at Love with Tila Tequila « Used Brains For Sale said,

tila and bobby broke up said,

[...] the first season, bobby not being able to handle her job and its pressures, so a broken-hearted …http://blog.sayoni.com/2007/12/29/revie w-a-shot-at-love-with-tila-tequila/Read “RE: A Shot at Love With Tila Tequila” at Competitive Reality Shows Forum …not trying to [...]
Reply
Refresh comments list
RSS feed for comments to this post