The Rainbow Flag made its first appearance in the San Francisco Gay and Lesbian Freedom Day Parade in 1978. Its symbolism was borrowed from the hippie and black civil rights movements. Artist Gilbert Baker from San Francisco, created the flag as a symbol that could be used year after year.

Along with about 30 volunteers, two gigantic prototype of the flag were hand-stitched and hand-dyed. The original flag had eight stripes, with each color representing a particular component of the gay community: hot pink for sex, red for life, orange for healing, yellow for sun, green for nature, turquoise for the arts, indigo for harmony, and violet for spirit. 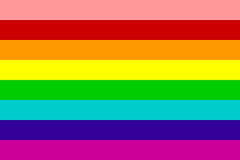 The following year, as a result of extraordinary demand for the flag, Baker contacted San Francisco Paramount Flag Company to inquire about the possibility of mass-producing his flag for use in the 1979 parade. He was surprised to learn that due to production issues and the fact that hot pink was not a readily available commercial color, his original eight colors could not be used. The fact is that he had hand-dyed the original colors. Hot pink was removed from the palette and the flag was reduced to seven stripes, with indigo being replaced by royal blue. 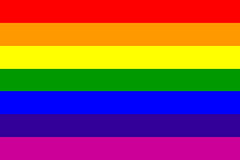 The second change to the flag came after the assassination of San Francisco’s openly-gay commissioner, Harvey Milk. To manifest the community’s solidarity in the aftermath of this tragedy, the San Francisco Pride Committee elected to use Baker’s flag in honor of the slain Milk. The turquoise stripe was eliminated so that the colors could be divided evenly on the parade route, three colors on one side of the street, and three colors on the other side.

Wishing to demonstrate the gay community�s solidarity in response to this tragedy, the 1979 Pride Parade Committee decided to use Baker�s flag in honor of Milk. The committee eliminated the turquoise stripe so they could divide the colors evenly as they walked the parade route, three colors on one side of the street and three on the other.

This updated six-color version of the rainbow flag quickly spread from San Francisco to other cities. Soon, it was universally known and accepted as a symbol of gay pride and diversity. And it is recognized officially by the International Congress of Flag Makers as such.