I am not as learned as you in law. I am but a first-year law student. A law student who happens to identify as queer, and has spent the last two years working in the queer activism scene, who now loves a woman, who now wishes to rid this country of the blight known as section 377A.

Ms Thio, I am sure you know this section very well… in fact, you dedicated an entire speech to the impassioned defence of it, not even touching on things like marital rape immunity. I am surprised… I thought an educated, feminist woman like yourself would have some feelings on this section which effectively takes away the right of married women to their bodies…. but I digress. You expounded in detail upon the merits of retaining this law. You showed us all how much you hate us gay people – like we couldn’t tell from the letters to ST. When I read your speech, my first impulse was to laugh. Then as I read on, cringing at the leaps of logic, and wincing at the palpable hatred pouring out of the paper.

I will now proceed to rebutt you: point by point.

Lee Hsien Loong has spoken, echoing both his predecessors in his views on homosexuality. It is interesting how the Father, the Holy Goh and the Spirit all seem to come down on the same side of the fence, willing to decriminalise but seeming to hold back for the fear of the “conservative majority”1

As of this moment, I will not deny that my morale is pretty low. It does not seem likely that the decriminalisation will take place in this penal code review. We neither have the time, nor the political climate, or rather, weather, on our side, given that the second reading is just 1 month away. In the first place, the announcement of the first reading took us by surprise, as it was originally slated to take place next year. By the time we learnt about it, it was too late.

Is it just me? Or are there hordes of gay couples watching X-Men at the cinemas today?

Months ago, I was at the movies with a whole clique of gay male friends and we were there for the sneak preview of the third X-Men installment. After we came out of the cinemas, one of our friends had to use the boy’s room. Following standard protocol, we waited in a small circle at the cinema entrance for him to rejoin the group. And as we waited and created a traffic obstruction, people streamed out like a river flow to our left and right. If there’s one skill I’ve learnt after hanging around gay men so often, is that your propensity for identifying gay men just skyrockets. And there’ to my left and right, were gay men in all their ‘NUM’/tanned/muscled glory. There were groups of three to four men-only cliques, and ‘couples’ of men walking together. It seemed that there were more gay people than straight people watching X-men.

Which makes me wonder, ‘why is it so often said that gay people identify with superhero movies?’ Especially the latest X-Men movie? What is it about the storyline or theme that draws us to such shows, even though they are not explicitly homosexual?

Here at Sayoni, we are not just about emotive stories, sociological observations, philosophical musings and political arguments. We do get out.

For the queer woman in Singapore, there are not a lot of options in the night scene – mainly small, rather dated pubs. Self-expression is limited at mainstream clubs catering to heterosexuals and I hear the butch-looking have been refused entry at their doors too. Our only respite in this desert is the occasional queer women’s parties at larger venues. 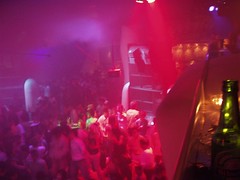 Last night, we arrived at Zouk for a Herstory party about an hour before the musical was to begin. At the counter, pride accessories ‘imported from the US’ such as rainbow wristbands and lanyards were available for sale next to the tickets. The male bouncers in white suits guarding the entrance were an elegant touch.

Inside, most of the best tables had been reserved and there were only a few stools, so we had to stand while we waited. According to lublub, it was usually packed by this time at previous pageants, but tonight, the stale air limbered along with the music. We were waiting for the musical featuring past Butch Hunt and Femme Quest winners.

Last Thursday, gathering my Sayoni mates and a whole lot of courage, I went to the MHA Focus Discussion Group for women. Coincidentally, or maybe not, it was held at Ang Mo Kio Grassroots Club, right in the bastion of the PM.

Upon registeration at the welcome-desk, one of our members refused to give our IC as identification, which caused some amount of confusion for the desk-helpers. Apparently, no one had ever tried to hold on their privacy before]. She was eventually allowed to pass. We went inside, and waited for quite a long time for the event to start, even though we had arrived after seven. During this time, we went through the amendments like we were mugging last-minute for an examination.

Finally, people started coming in. AWARE members took up at least half the audience, and the rest was made up of Sayoni women and private citizens. Two girls, one of whom we recognised to be a PSC/President's scholar, started the event by welcoming everyone, and reading out the entire amendment in, all 8 pages of it, in flat tones. Before I zoned out, I noticed one comment on the powerpoint presentation: they explicitly stated that lesbian sex would not be criminalised. And the speaker added a comment that this was 'so as not to give the impression that we are regressive in the area'. We could only look at each in confused incredulity, aware of the glaring contradiction as 377A was still in place.