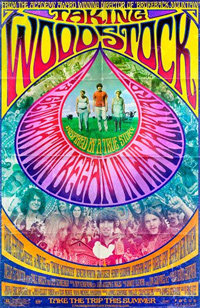 Directed by Academy Award-winning director Ang Lee (who brought us what were to become gay classics The Wedding Banquet and Brokeback Mountain), Taking Woodstock is based on the memoirs of a young gay man Elliot Tiber (Demetri Martin). Tiber, then a struggling young interior designer in New York City, had recently returned to his parents’ rundown motel in the Catskill Mountains when he heard that a planned concert had lost its permit from the neighbouring town of Wallkill. He then called producer Michael Lang (Jonathan Groff) at Woodstock Ventures providing a much-needed performance permit and offering his motel as the production headquarters.

The 1969 Woodstock Music and Arts Festival, which attracted 500,000 people, turned out to be one of the most iconic events of the hippie generation and is today widely regarded to be one of the greatest and most pivotal moments in popular music history.

100% of ticketing proceeds will go towards funding gay-related community projects.

Since 2005, Fridae has organised six movie-fundraisers raising over S$60,000 in benefit of a variety of NGOs including Action for AIDS, AWARE, Cat Welfare Society; two independent short films by Boo Junfeng and Loo Zihan; and Indignation – which Fridae has financially and in other ways supported since it was first held in 2005. Pink Dot, the first-ever official LGBT public gathering held in May 2009 in Singapore, was also a beneficiary of Fridae’s Milk Fundraising Gala Premiere held earlier this year.

I am so honored that you chose to show my movie: Taking Woodstock as a benefit for your gay community.
I vacationed a dozen years ago in Singapore and had no idea there was even a glbt community.
You might let your audience know that the book has so much more about my growing up gay in a hostile homophobic NYC environment.
I hope my book and the movie is an inspiration to peole, especially the GLBT community.. that we are worthwhile human beings, and unfortunately most movies show gays as suicidal depressives, killers, and psychologically unbalanced people.

Best luck to you.

I sure wish I was able to come and present the movie. sigh