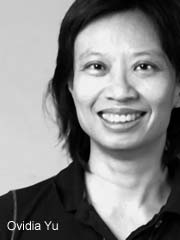 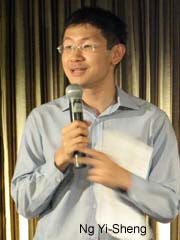 How do women who don’t pair up primarily to procreate view the expiry of their youth and ovaries? Ovidia’s short story takes a light-hearted look at how one woman who’s no longer entitled to free drink vouchers on Ladies’ Nights survives the stereotypes of middle age straying lovers and a (sterilised) ex-stray cat.

Yisheng’s offering, on the other hand, a deliberately absurd story about Vladimir Koh Nah Bay, a young man who is sexually attracted to only male senior citizens. Vladimir describes his youthful discovery of his urges, his rapid rise through the world of commerce due to his affairs, and his scandalous liaisons with unnamed political figures. The entire tale is told in the form of an official letter which forbids the reading of the story on the grounds of its disturbing effectiveness in converting people to be attracted to old men.

Ng Yi-Sheng is a poet, playwright and writer. His first book of poetry, “Last Boy”, was published in 2006. His poems have also been published in the poetry anthologies “First Words”, “onewinged”, “No Other City” and “Love Gathers All”, as well as the journals “the2ndRule”, “QRLS”, “Softblow”, “Quarto”, “Asian Journal” and “Queer”. He won the SPH-Theatreworks 24-hour Playwriting Competition two years in a row, in 1998 and 1999, and has been published in the play anthology “5 under 25″. His performed plays include “Serve”, “Snake”, “Redhill Blues”, “Hungry”, “251″ and “Georgette: The Musical”. In 2006, he published a collection of gay, lesbian and bisexual Singaporeans’ coming out stories, “SQ21: Singapore Queers in the 21st Century”.

Ovidia Yu is an award-winning female novelist, short-story writer and playwright. She is the recipient of the Japanese Chamber of Commerce and Industry (JCCI) Singapore Foundation Culture Award (1996), the National Arts Council (NAC) Young Artist Award (1996) and the Singapore Youth Award (1997). Her plays have been peformed locally and abroad.

Sayoni Events « And this… is how AnJ ticks. said,