This post is by guest writer Jennifer Koh, about the activist reading of Eve Ensler's The Vagina Monologues presented by Etiquette and Sayoni at The Arts House on 10 May 2013. 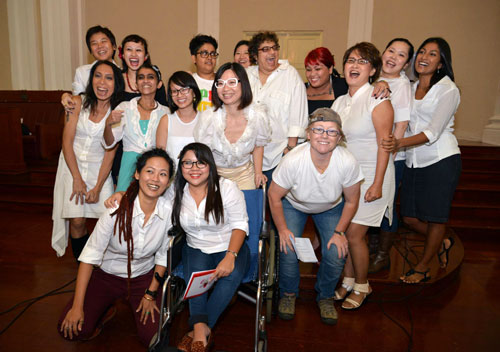 All the world's a stage,
And all the men and women merely players:
They have their exits and their entrances;
And one [wo]man in [her] time plays many parts [...]

- William Shakespeare, As You Like It (Act II, Scene vii)

How many names do we have for the vagina? Thirty-nine at my last count, according to the rendition of The Vagina Monologues presented by Etiquette and Sayoni, staged at The Arts House on 10 May 2013.

This was a community reading that brought together 16 women of different ethnicities, sexual orientations and occupational backgrounds, all of whom are active in civil society, to stand in solidarity as part of V-Day 2013, an annual global campaign to raise awareness about gender-based violence and raise funds for local beneﬁciaries whose work addresses gender-based issues.

In adapting Eve Ensler’s play, originally intended for a North-American audience, the producers and participants took care to re-contextualise it for a local context with a diversity of Singapore-based accents, colloquial expressions, statistics and geographical references [and so the vagina goes by different names in Choa Chu Kang, Ang Mo Kio and Punggol].

Dealing with themes related to inclusiveness and justice, issues of violence, and the oppression and agency of women’s identities, bodies and selves -- My vagina’s angry and needs to talk! -- the ensemble piece called attention to its self-reﬂexivity as performance with the use of script cards rather than memorised lines, dramatic readings over dramatic acting.

It was a memorable recital with many poignant and humorous scenes, which included the many ways of dressing the vagina, the names of vaginas, the old woman who cried when she found her clitoris (it took her an hour because she was arthritic), how "you can't love a vagina if you don't love hair". Who, too, could forget the woman who didn’t know how to have orgasms because she always had them accidentally, or the woman who had sex with a man who read her vagina like a palm so that she “began to see [herself ] like he saw [her]”, or the experience of going back to school to spell C-U-N-T, under the repetitive instruction of an enthusiastic feminist schoolteacher. And, most aptly situated at the climax of the performance, a choral delivery of the different kinds of moans during love-making -- our passions rose with the performers’ to parodied stereotypes such as the college girl moan, the triple orgasm moan, the diva moan, the bollywood moan, the convent girl moan, even a Singaporean moan -- shiok la!

But make no mistake -- this was not a comfortable performance, nor was it meant to be. Punctured by readings of statistics on violence against women, such as rape, sexual assault and female genital mutilation, graphic descriptions of sex and sexual explorations, with women, with men, for pleasure, against pleasure, references to the vagina (and its many names), the clitoris, bodily ﬂuids, moaning, oh much moaning, our ears (our bodies!) were assaulted by the full measure of sex, its intimacies  and invasions. Shakespeare scholar Carol C Rutter’s observation of how no body in the theatre is exempt from the brunt of performance -- least of all the spectator’s [1] -- was particularly apt in this theatre.

For a play that talks so much about the body, operating on the axiom of reclaiming the body and transgressing the body politics of socio-cultural norms and hierarchies, it was interesting, too, to observe how women’s bodies played on stage.

All but two of the performers were clad in white -- unbound to associations with purity, kindness, light -- some  wore  dresses, some skirts, others more androgynous  clothing. What was striking at times was a disjunct between the actresses’ clothes and the roles they played -- an androgynously dressed woman in a white shirt and bermudas talking about her vagina and sexual desires for the opposite sex [“there was a ﬂood down there”] -- calling into question our notions of sexual  expressions, repressions and ﬂuidities. Other uses of the body were more limited to gestures such as ﬁst punches, ﬁnger wagging and pussy covering -- vacillating between acts of aggression and withdrawal, navigating the complex ways in which women relate to their bodies and the gaze of others.

Most symbolically throughout the performance, the women rise to speak, and this simple act of rising is charged with personal meaning -- perhaps best embodied in the closing lines of the performance. Here the 16 women rise one last time, delivering these words in turn:

I am rising because I feel more women should love themselves, warts wrinkles and all.
(Veron Lau)

I am rising because my own country treats me like a second-class citizen simply because I'm gay.
(Jin-Ee Kwan)

I am rising because as a transwoman it is often impossible to get a job just because of what we are. I need to have this right to survive to stay alive... Give us jobs!
(Tricia Leong)

I am rising because it’s still acceptable to hide behind religion to persecute on the basis of gender and sexuality.
(Robin Rheaume)

I am rising because I think it is ridiculous that 'Asian values' is still an acceptable reason to subjugate women and gender minorities.
(Fuzzie Sirajudin)

I  am rising because if I cannot have safe and consensual sex without being stigmatised, criminalised, shamed and discriminated against, then it is not my revolution.
(Vanessa Ho)

I am rising because I think it is time we stop living our lives and judging others based on gender stereotypes.
(Rachel Zeng)

I am rising because family should not be deﬁned as one man, one woman and 2.1 children.
(Olivia Tan)

I am rising because I'm tired of this neutral and sanitised talk about gender equality and sex discrimination. It’s time we call a spade a spade and talk about women's rights.
(Sanushka Mudaliar)

I am rising because as a queer woman, I am still on the receiving end of, "Let me help you get used to cock."
(Miles Tsang)

I'm rising because there's no freedom till we're all equal.
(Prema Menon)

I am rising because I am tired of the false idea that women with disabilities are unﬁt to be mothers, wives, lovers and most of all, contributing members of society
(Fariza Stromblad)

And therein lies the potency of the performance -- it is in the ﬁnal fusing of the performers’ roles on and off the stage where theatre is at its most powerful. [Vanessa, a sex activist, took on the character of a sex worker who works with women.] For here, not only do we see women who act as characters on stage, but women who act for a revolutionary good in their corners of inﬂuence, towards a real life theatre of transformation.

Loved that you mentioned the "disjunct" between roles and the way people dressed making us question our notions of gender expression; I felt that bit of discomfort was a good reminder that human beings are wonderfully complex and fluid.
Reply
Refresh comments list
RSS feed for comments to this post