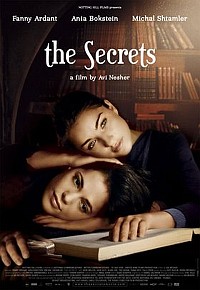 In the past few weeks, there's been a good buzz coming from Vietnam. The Associated Press reported on the Justice Ministry's proposal on same-sex couples, and the Justice Minister said some very reasonable words that show a respect for LGBT rights that have never come from our local Singapore ministers.

Even longtime gay rights activists are stunned by the Justice Ministry's proposal to include same-sex couples in its overhaul of the country's marriage law. No one knows what form it will take or whether it will survive long enough to be debated before the National Assembly next year, but supporters say the fact that it's even being considered is a victory in a region where simply being gay can result in jail sentences or whippings.

[...]
"It's time for us to look at the reality," Justice Minister Ha Hung Cuong said last week in an online chat broadcast on national TV and radio. "The number of homosexuals has mounted to hundreds of thousands. It's not a small figure. ... They may own property. We, of course, have to handle these issues legally."
From The Associated Press
Add new comment 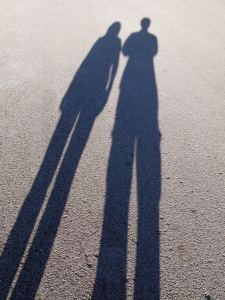 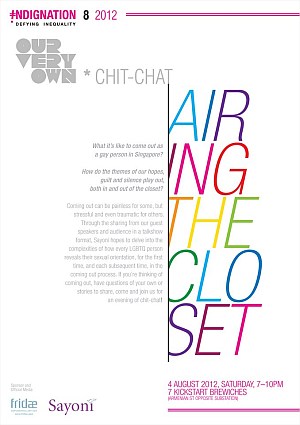 What's it like to come out as a gay person in Singapore? How do the themes of our hopes, guilt and silence play out, both in and out of the closet?

Coming out can be painless for some but stressful and even traumatic for others. Through sharing from our guest speakers and the audience in a talk show format, Sayoni hopes to delve into the complexities of how every LGBTQ person reveals their sexual orientation -- for the first time, and each subsequent time -- in the coming out process.

If you're thinking of coming out or have questions or stories of your own to share, come and join us for an evening of chit-chat!

Airing the Closet: Our Very Own Chit-Chat 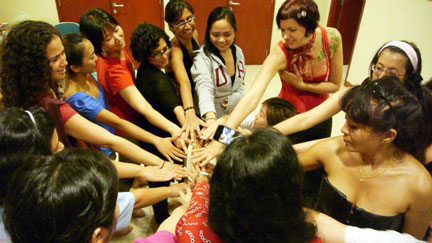 This post is by guest writer Bianca, written in celebration of V-Day 2012 Singapore, held at the Arts House on 22 April. V-Day is a global activist movement to stop violence against women and girls through the use of creative events to promote awareness and action.

In swashes of pink, red and black

Red shoes, or black or barefoot with pink painted toes

To tell the story on sacred stage