Courts Asked To Declare On Employment Equality
Singapore, 4 October 2013 – As equality laws are being revised worldwide, the Singapore courts have been petitioned to declare that Constitutional equality should apply in the workplace.

Lawrence Wee Kim San was recently dismissed by Robinsons, the iconic department store, on the grounds of sexual orientation.

In a historic application, Wee, a former senior management executive, is applying to the High Court here to declare that Article 12 should apply to all forms of discrimination at work.

The city state, heavily dependent on high-skilled labour, has sought to make Singapore attractive to professionals. In recent years, the economy has stepped up efforts to stem the outflow of Singaporean and foreign professionals, attracted by rapid development in neighbouring countries.

In May 2011, at the United Nations Convention on the Elimination of All Forms of Discrimination against Women (CEDAW) Review, the Singapore government declared, “The principle of equality of all persons before the law is enshrined in the Constitution of the Republic of Singapore, regardless of gender, sexual orientation and gender identity.”

Wee’s application, widely regarded as a test case, is expected to declare the law in respect of workplace discrimination. Having significant implications for labour relations, it will be watched closely when it is heard in November.

A group of concerned citizens, calling themselves Article 12 Non-discrimination @ Workplace Committee, have come together to support the application. Dr Roy Tan, a spokesperson for the committee said, “Our name makes reference to the Constitutional provision that entitles everybody to equal protection of the law.”

Wee’s lawyers noted, “With the challenge before the Court, Mr Wee, on behalf of all Singaporeans, is seeking a declaration that Article 12 should be interpreted to confirm the government’s position that all persons, regardless of gender, sexual orientation and gender identity, are indeed and in fact protected by Singapore’s employment laws.”

Dr Tan added, “In the coming days, the Article 12 Non-discrimination @ Workplace Committee will release further information on the campaign and opportunities for like-minded individuals to show their support.”

For further information, please contact Article 12 Non-discrimination @ Workplace Committee at: This email address is being protected from spambots. You need JavaScript enabled to view it..

Add new comment
The Institute of Policy Studies, a think-tank within the Lee Kuan Yew School of Public Policy at the National University of Singapore, conducted a survey with 4000 Singaporeans as part of Our Singapore Conversation. Contained within its questions were some on “gay lifestyles” and same-sex marriage. I’m writing this out of a deep sense of uneasiness at the questions asked, and of course, disappointment on several levels, both as a queer woman and as one of those Singaporeans the conversation is supposed to be for.

First, I want to say that language matters, and this is true everywhere, including and especially in a research survey. From the chart (reproduced below), “gay lifestyles” appears to be the term used to measure acceptance or rejection. But what were they accepting or rejecting? Us. LGBQ persons. By framing our sexuality as a “lifestyle”, were the researchers trying to set it up as a objective quantity, something that can be added and subtracted with ease? Because that’s what they might have been suggesting to the respondent.

“Gay lifestyle” implies choice and ease of change. No matter how important a role nature or nurture play in being gay, it's not something we just stop being. Being queer is an important part of who we are and is closely tied to crucial, positive human feelings such as love and affection as well as sex. Referring to it as a lifestyle implicitly rejects queer people, and if the survey said this, I’d like to know where the researchers were coming from in asking the question.

Every movement starts with the few who step out a little further than the rest, and change happens from there. By coming out and being visible as an LGBTQ person or ally, we encourage others to step out of their closets, too.

COuCH, which stands for Come Out Come Home, is a Sayoni community initiative to encourage and support LGBTQ persons and allies to come out or be more out than they already are. In particular, we hope to reach LGBTQ persons who are or are trying to be ready to come out.

The movement was inspired by studies which have shown that there are many positive effects when LGBTQ persons come out. This is also about celebrating the people – families, friends, and/or peers – who love, accept and support us, and thus encourage us to be out. COuCH aims to empower and provide visibility to the LGBTQ community and our allies. This helps the world understand that we are part of and play many different roles in society.

From 3 August 2013, genuine stories about Singaporeans coming out, as a queer person or ally, will be published and streamed online through a dedicated website (COuCH.sg) and its Facebook Page.

As one of Sayoni’s founders, Jean Chong, said at the launch of the movement at Indignation 2013 on Saturday, “We often talk about the need to dialogue with those on the opposing side... But the dialogue needs to start in our homes, with our community, with our friends, and most importantly with ourselves.”

We call on all LGBTQ persons and allies who can come out, wish to come out or feel they are ready to, to participate by sharing your photos and stories, uploading a video, making a pledge with us to come out, or contributing funds to support the initiative. The campaign peaks on 11 Oct, International Coming Out Day, with a special event.

WHAT YOU CAN DO 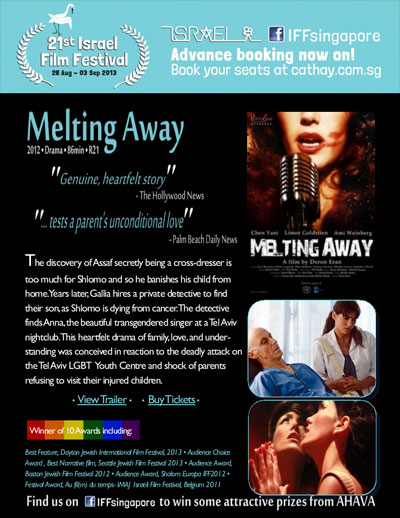 The Israel Film Festival, which has been consistently LGBT-friendly, this year brings us Melting Away (2011), the moving story of a transgender woman and her family. Synopsis below:

The discovery of Assaf secretly being a cross-dresser is too much for Shlomo and so he banishes his child from home. Years later, Gallia hires a private detective to find their son, as Shlomo is dying from cancer. The detective finds Anna, the beautiful transgendered singer at a Tel Aviv nightclub. This heartfelt drama of family, love, and understanding was conceived in reaction to the deadly attack on the Tel Aviv LGBT Youth Centre and shock of parents refusing to visit their injured children.

The movie has been rated R21 (why am I not surprised?) and is in Hebrew with English subtitles. You can buy tickets from the Cathay website or find out more details about the film festival in their programme booklet.

Another queer film coming from Israel appears to be Yossi (2013), the story of a gay man finding love in an unexpected place. The IFF Facebook page appears to have a contest for tickets to the advance screening that ends on Sunday, if anyone's interested.

As part of IndigNation 2013, Sayoni will be hosting two events. "Same-Sex Parenting: Raising New Standards" features a special afternoon with queer parents, while "Southeast Gaysia!" casts the spotlight on the little-known revolution happening in Asia.

We will also mark the launch of our new campaign, "Come Out Come Home", a movement to support all queer/LGBTIQ persons who wish to come out or be more out, and which celebrates and supports the allies who enable their LGBTIQ family, friends and colleagues to come out.

Here's the latest schedule. More info - and event links - can be found on the IndigNation Facebook page.

SATURDAY 10 AUG // 8PM
I Will Survive with Music

SUNDAY 18 AUG // 2-6PM
Be With Me: An OC Women workshop for women who love women

ABOUT INDIGNATION
IndigNation, an annual showcase of the Singapore LGBT community’s diversity, is now in its 9th edition.

Over the last eight years, IndigNation has showcased many facets of Singapore's LGBT community. From talks to film screenings, art exhibitions to illicit mass runs and flash mob picnics, Singapore’s homegrown Pride season has celebrated the visible and not-so-visible aspects of our country’s sexual minorities.

This year, our theme is "Faith in the Future", looking ahead to what possibilities there are for the LGBT community - not just about LGBT rights, but how we envision our future as LGBT people in Singapore.

Come and dream and hope together - because the only future we can have is the one we dare to dream of.