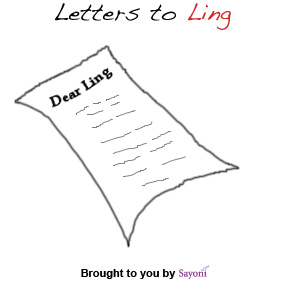 Facing a problem with your life, your sexuality, relationship, family et cetera? Write in to our advice columnist, Ling, with your problem. All emails are confidential and your anonymity will be preserved.

I have been in a relationship of 2 years with another woman. She is a great woman, and I love being with her. However, before I met my current girlfriend, I was in a relationship with a woman for 4 years – and I was completely in love with her, and I saw myself spending the rest of my life with her. Our relationship ended because she had to move to Canada for work, and there wasn’t much chance she was going to come back, or me being able to move there with her, due to reasons like family and work.

After that, I met my current girlfriend, made myself move on and make a new life. However, I have never stopped loving my ex, and I still feel that I could spend my life with her. I love my current partner, but I don’t see us settling down long-term.

Recently, my ex returned from Canada for good. And we have been meeting up for coffee, and feeling the old feelings return. I have not cheated on my partner, and I will not, but I am thinking of leaving her. But she’s such a wonderful woman, and I don’t want to hurt her. But at the same time, I know I am in love with my ex, and will always be.

What should I do?

For those of you who are well-acquainted with LGBT happenings around the world, you would know that some Beijing activists staged a mock wedding photo shoot on Valentine's Day. You can read more about it here.

Irene from Sayoni had the honour of interviewing one of the brides, Dana, about her thoughts and experiences.

Irene: Hello Dana. Could you tell us why you (and your friends) conceptualized this idea?

Dana: Actually, some of us have been giving out flowers on the streets on Valentine’s Day since 2007. Flyers urging support for gay marriage were wrapped around the roses. We organized a series of events in 2008 on top of giving out flowers, such as collecting thousands of signatures supporting legislation of same-sex marriage in China and staging a public exhibition of the signatures. We made it a month-long equality campaign, starting from Valentine’s Day to the annual meeting of China’s People’s Congress. Thus, this event in 2009 was not impromptu. It was the result of continuing what we had done over the past two years.

Irene: Are the two of you a couple? You two look really good together.

Dana: No, she is my good friend. We have our own respective partners.

Irene: I remember that you guys gave out roses on Wangfujing during Valentine's Day in 2007. Is there any particular reason why you chose Qianmen Dajie for this year's event?

Dana: We wanted to hold it in a downtown area because we would like to enhance the visibility of gay people. Furthermore, Qianmen is a landmark place which is very uniquely Beijng.

Irene: How did it feel to take the centre stage for this event? What were the reactions of the passer-bys?

Dana: The wedding gown is such a magical item. The sense of happiness from wearing it is indescribable. I think my other friends would have more to say about taking wedding pictures on the streets, as I was fully focused on my pose and actions. I had to be very careful because I was the focus of attention that day. Of course we had all kinds of reactions. Regardless of what the news reports or the CCTV poll say, I received much more blessings than disdain on that day itself.

Irene: Could you share with us any particularly interesting experiences with the public on that day?

Dana: A middle-aged man rushed up to give us his blessings. There was a woman in her fifties who praised us for being so courageous. Many people were fighting to give us flowers or take pictures with us. I didn't really see too many reactions as I was absorbed in the photo taking.

Irene: Did the news reports (including photos) in foreign media create any pressure for you? For example with family, friends or colleagues at work... Do you have any concerns about how they would react if they were to see them?

Dana: I am not too worried about the reports in foreign media as my family lives mainly in China. But there is some local media coverage such as the CCTV online poll, NetEase, Tencent, which my family and friends might surf. I have some concerns because I have no plans to come out to my family for the time being.

Irene: Was it difficult to look for the grooms and brides for this event?

Dana: The four of us were decided upon by our personal contacts. There are very few gay people who would face the media in public. Furthermore, we need to take care of the visual details, like whether the couples would look good together in front of the cameras. In this aspect, the selection process was not easy.

Irene: Do you have any other thoughts which you would like to share with the Singaporean friends?

Dana: We hope that we can help more people realize that love between same-sex couples are just as beautiful as heterosexual couples, and it shouldn't be demonized with all sorts of bad names. If we have inspired some people who are working in gay activism, that would be an additional bonus.

On a more personal note, wearing the wedding gown for the first time has left a profound impression on me. I believe any woman would feel very happy in it.

This year, we are bringing back a classic which explores gay issues in Singapore Chinese theatre. Performed in 1992, Another Tribe was written by Otto Fong and is the first local Chinese play to explore gay issues. The original cast, Jackie Liu and Kevin How will be reading for their own roles from over 10 years ago. Together with Otto Fong and the director Kok Heng Leun, they will be present to share with the audience their experiences and thoughts while embarking on such a taboo topic at that time. Renowned writer and playwright Quah Sy Ren will also be on the panel to comment on the play as critic and audience.

Read the interview with Otto and Jackie on this play, published by Lianhe Zaobao.

Facing a problem with your life, your sexuality, relationship, family et cetera? Write in to our advice columnist, Ling, with your problem. All emails are confidential and your anonymity will be preserved.

I’m a married woman in my 30s, with two kids and a wonderful husband. Wonderful as he is, I know I am not in love with him, and never can be… I knew I was a lesbian even before I got married… but my parents were pressuring me to find a husband before my time was up, and so I did. He is a great husband and a father, and I’m fairly fond of him. Our sex life, however, is practically non-existent… every time he tries to initiate sex, I make up an excuse and decline, because every time we do, I feel like crying, and I often do, after he has fallen asleep.

I love my kids, and I want what’s best for them. I don’t want to put them through a divorce, and it is not like my husband is a bad man. But the longer I stay in this relationship, the longer I feel I am lying to myself, and the more depressed I get. I don’t know what to do.

This begins a new column on Sayoni Speak, Letters to Ling. Facing a problem with your life, your sexuality, relationship, family et cetera? Write in to our advice columnist, Ling, with your problem. All emails are confidential and your anonymity will be preserved.

I am living with my girlfriend of three years. We’re really in love, and we plan to spend the rest of our lives together… except for the fact that there is this really cute co-worker who I am really physically attracted to, and I really can’t help it. I don’t love my girlfriend any less, she’s still the love of my life, and everything is fine in our sex life. So I don’t understand why I am so attracted to her, and it is very distracting at work, and I feel really guilty about thinking of someone else at all. I am terrified my girlfriend will find out and it is going to ruin our relationship, even though I’ve done nothing with the other girl, who happens to be gay as well.